it’s fall. can we give the ghetto-ass ice cream truck a break now? 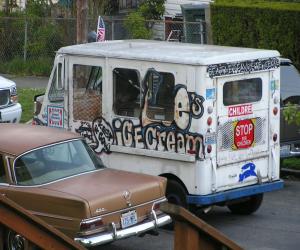 ok so this isn't one from our neighborhood fleet, but it's damn near close. heaven forbid i try to take a picture of one and it might stop thinking i want some hepatitis softsorve.

please??? just one day. all i’m asking for is one day without “pop goes the weasel” or some other numnuts half-assed tune jangling full blast down our street.

oh the neighborhood ice cream truck. or trucks, as i honest to goodness don’t know if it’s one truck or a whole fleet of ’em (i mean, can you tell roaches apart? not really! you see my point). sometimes i think they’re gonna be the end of me. like, they are gonna drive me to drink. and i am not a drinker.

“honey,” i often say to holly, usually when i’m fighting a migraine late in the day, when i just want dark and i just want quiet. “i swear, if we had a gun and i was a different person, i’d blow the speaker right offa that thing.”

“i know, honey,” she says soothingly. “i know you would…shhhh…”

it starts waaaay before memorial day, these ghetto-ass ice cream ice cream trucks and their gosh-forsakin music. i don’t know what time of day they start (after all, i’ve been doing the whole m-f, 9-5 thing, until now, that is, ha) but i’ll tell you what time they do stop: LATE.

now you tell me: what type of ice cream truck is still blaring its damn music and sitting on street corners at 10 or 11 p.m.? is it just me or do you think these trucks are selling more than just ice cream? i’ve even called the cops on them.

“uh, hello,” i say, my voice a combination of intense irritation and exhaustion. “there is an ice cream truck in our neighborhood that will. not. quit. it’s almost 11 at night! i’m trying to sleep! i have to work tomorrow!”

then the operator tells me that they really can’t do anything about it until after 11 p.m. or some other such bullsh*t. and then i hang up and curse this city and its supreme ghettoness. the worst is when at the tail end of summer, they start playing christmas music. “silent night”? at 97  degrees and 99 percent humidity? try that one on for size.

here’s another funny thing: all this time–for three years now–holly and i thought these trucks were selling, you know, your typical packaged ice cream…sandwiches, popsicles, that sort of thing. then we find out–as holly approached the doggone truck in a moment of sheer i-need-ice-cream-now weakness over the summer–that the doggone thing sells soft serve. who in their right mind would buy friggin soft serve from a ghettoass baltimore ice cream truck that blares “silent night” in the middle of summer, at 10 p.m., that probably hasn’t been cleaned since 1965??

actually i do know one person. our welder. the guy who welded the industrial-style steel staircase in our house. all the sudden it’s coming back to me how he used to buy milkshakes from those trucks when he was working in here. he was also going thru major morphine withdrawl from a 60-some ft. fall on his face. but you see where i’m going w/this.

anyway, i know it’s hard in this town, but all i’m asking for is a little peace and quiet.

3 responses to “it’s fall. can we give the ghetto-ass ice cream truck a break now?”