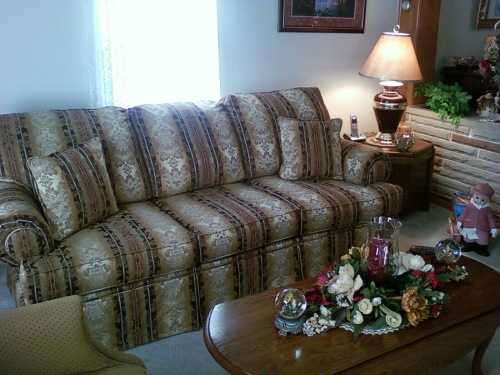 our hands were cold as ice as we drove to holly’s grandma’s saturday afternoon. we sat in the front seat of holly’s jeep, looking at each other occassionally as we zoomed around corners and winding roads, finally down the hill into the old section of butler, where it looks like a little city, with houses mostly made of brick, sidewalks and shoe stores, cleaners and a grand city hall. most homes in downtown butler have seen better days, but her grandma’s house is always impeccable, inside and out. (and when i say impeccable, i mean, put-a-white-glove-on-and-inspect-for-dust-and-you’ll-find-none impeccable) we made the trip last weekend not only to visit with holly’s family (our last before the wedding), but mostly to tell her grandma that we’re getting married. we wanted to do it in person. we would have done it a long time ago, but holly’s been so scared to break her grandma’s heart. she’s had a full life–a life of pride and love and hard work and family–but she’s also had a lot of disappointment, and the last thing holly would ever want to do is add to that, she just loves her so much…

she found out we were together a couple years ago. we didn’t tell her, someone else did. we think he did it to hurt her. his plan backfired b/c she wasn’t hurt, holly’s (twin) sister found out when she talked to her–she was just sad she was the last to know. since then, holly’s never actually talked to her grandma about us, but, when they speak every night, she always asking who’s cooking dinner, what i’m up to, what we’re doing, etc. it’s like she knows, but she doesn’t. we think she just kinda absorbed the information and pushed it to the back of her mind. it’s never been an issue. she likes me. i’m crazy about her. but in (GULP!) three weeks (from tomorrow) a good percentage of holly’s family will be coming down to DC to attend our wedding and, well, she needs to know.

so we arrived. holly sat her down on the couch and i sat nearby on an armchair. holly handed her an invitation. the type’s a little small (doggone internet printers!), so she put on her glasses and leaned over the arm of the couch to examine it under the light. she turned around and looked at holly and then looked at me and said she was a little confused. she looked so small and cute, with her glasses making her eyes look bigger than they actually are. (i love that about grandmothers!) it didn’t take long to explain things to her, and all i have to say is thank goodness she watches “access hollywood” before she goes to bed every night and thank goodness ellen got married b/c she got it, she really did. (“i see on tv that they’re all doing it,” she said) i’m not going to say she’s over the moon about it. but she didn’t shed a tear and she didn’t get mad or even have a cross look pass over her sweet little face.

since this was the first time we actually addressed the fact that we’re a couple, we covered all the bases. “i kinda figured,” grandma said. “and if this is what makes you happy.” everyone deserves to live their own life she said, and “if the Lord’s ok with it, then so am i.” she asked if my parents know and if they’re ok with it and i said yes. it was a really good conversation, and very quickly lightened a huge load off our collective shoulders, especially holly’s. poor thing, she was crying before her grandma even finished reading the invitation. it’s so close to thanksgiving, her grandma said, so she probably won’t be able to make it. (she makes thanksgiving dinner for at least a dozen ppl, usually more, each year, so she starts preparing way in advance, it’s so cute.)

we stood up to leave, our socked feet (everyone has to take off their shoes as the door) sinking into her perfect, plush carpet, and she looked at holly. “i love you,” she said, turning to holly. “i’ll always love you no matter what and i’ll love you until the day i die. i don’t feel any differently about you. you’re my granddaughter and i love you.”

i’ll tellya, there’s nothing like a grandmother to get my waterworks going. it was all i could do to keep it together. she gave us nice tight hugs, and we put our shoes back on and walked down the porch steps across the street to the car. she looked out at us thru her storm door like she always does and waved as we drove off. we waved back and grasped each other’s hands over the cupholders as we drove back to holly’s parents’, each sighing a huge sigh of relief. we did it, holly said. we did it. indeed we did. i can’t wait until after our wedding when we look at each other, sigh and say the very same thing.