it’s almost fall: here’s all the sh*t that needs to end. 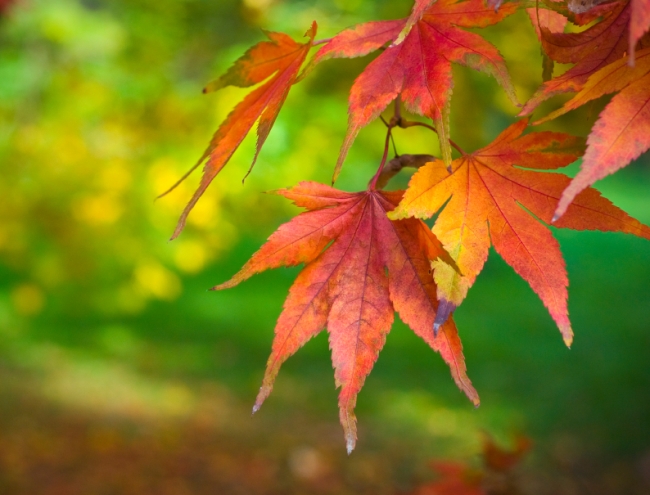 oh beautiful crunchy fall leaves! what a friggin concept. can we do the damn thing already? damn!

i wait ALL YEAR for this time of year. ALL. YEAR. i start listening to the smiths and early REM in, like, mid july, trying to will the season in. i even occasionally bust out the high tops and boots (much to holly’s chagrin) and you know what? i may look a little ridiculous but i do it for fellow fall lovers. i do it for you. and i do it for me.

usually it works BUT NOT THIS YEAR. this year everything is all wrong. it doesn’t friggin feel like fall is coming AT ALL.

here’s all the sh*t that needs to end right now so we can do the damn thing:

the heat.
it’s so damn hot out. what the hell. BRING ME CRISP AIR NOW. i want. to wear. a damn. sweater. what don’t you understand about that? damn!

the humidity.
don’t even get me started on the humidity. how are we supposed to have any DAMN CRUNCHY LEAVES with this humidity? the answer is we can’t. it’s just not right.

the DOGGONE DAMN ICE CREAM TRUCK.
c’mon! put it to rest, man! take that rusty old salmonella-carrying clunker you call an ice cream truck and hide it. then don’t bring it out til spring. stupid ass.

people being annoying.
ok this is actually all the time. i just felt like bringing it up now. if you’re annoying. like, if you don’t know how to put your damn blinker on when you drive. or you’re not capable of not taking up an entire grocery store aisle with not only your body but your damn cart, then just stay the hell home or else i will be forced to pull out your weave–and if you’re not wearing one i will tape one to your damn head and pull it off–and smack you in the face with it.

the dog poop.
i seriously think there are packs of wild dogs running around baltimore because i swear every time we take a walk one of us is always pushing the other saying WATCH OUT! coming thiiiiis close to stepping on dog poop in the middle of the damn sidewalk and nearly giving each other a heart attack each time. i am just bringing this up now but it needs to stop throughout the year. summer just makes it feel worse. everything feels worse in the damn summer because it is so damn hot.

the yellers.
the drinking as soon as the damn sun comes up? it needs to stop. all day from my (home) office i hear weirdass drunk motherf*ckers shouting and it’s like, people: you may be able to drink like that in the summer but the season’s coming to a close. let’s give it a rest so i can get some work done dammit. pack it in and shut the hell up.

the weirdos.
i swear the heat brings out every last doggone weirdo in the city. GO INSIDE. be weird in your own damn house and stop freaking us all out! jesus.

the heat.
the humidity.
oh right i already said these but it’s so damn hot i forgot.

i’ll tell you what else is wrong:
the jewish high holidays came earlier than they have in, like, multiple generations (i don’t know how to count a generation and i’m too lazy to google it right now). the last time they fell this early in september it was 1889 or something. obviously i’m failing already because i made a (jewish) new year’s resolution not to curse so much and in this post alone i said “damn” 13 times, “sh*t” twice, “hell” three times, “ass” twice, “dammit” once, and “motherf*ckers” once.

here’s my list if you don’t believe me:
(i starred out the vowels in case, you know, there’s kids reading.)
(and yes, i’m aware my handwriting is quite bad.) 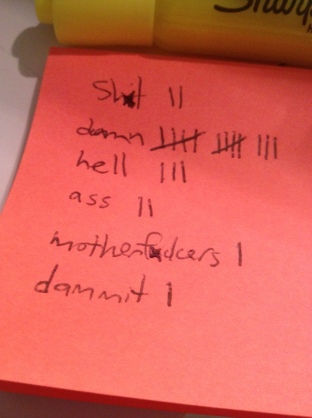 actually i just fooled all of you: do you really think i’d make a new year’s resolution not to curse?! that is crazy! i don’t drink. i don’t smoke. this is my only outlet. if i didn’t do it i’d be wreaking havoc on society and my marriage. plus i know i couldn’t keep it and that would be sacrilegious.

ACTUALLY. actually i just added the photo of the leaves at the top of this post and i wrote “damn” twice in the caption. so that’s 18. i thought about not mentioning it but that would be wrong.

so listen. obviously i’m mad. (i really did make a new year’s resolution not to be so damn mad.) (19, oops!) and obviously this will have zero effect on the universe or the earth’s axis or whatever the hell (ok i’m going to stop counting now) controls the seasons but let’s all join hands–no wait. i’m a germaphobe. i don’t want to touch your hand. let’s just get pumpkins. those are available now, right? yeah let’s get some pumpkins and carve them. toast the friggin seeds. throw some salt on ’em. yeah. they’re so good, right?

turn up your a-c (I KNOW IT’S NOT “GREEN” BUT BEAR WITH ME OK) and throw on a sweater. get your boots on. take out your halloween decorations. hell, break out pilgrim desk decorations if you’ve got em. COOK A THANKSGIVING DINNER.

that’s it! cook turkey. cook a damn turkey in your sweater. let’s all do it at the same damn time. i’d help you but i have to go to michael’s now to make a fall wreath. i used to hate fall wreaths but i’m “adult” now and i love them. holla!

Posted in baltimore, freaking out about virtually nothing, friggin a, wtf