yes it was evan’s (see above) lucky day yesterday, as rochester ny’s most fabulous new resident was baptized (much to our local delight!) in baltimore’s own greektown. he’s got quite’a set’a lungs, that kid, as he let out some serious howls after he was dipped in holy water a few times. (umm, if you were cold and naked and wet (and most likely hungry) in front of a crowd in a church, you’d probably be crying, too.) then he peed on his godmother, poor kid. ha. it was adorable, tho. we love him.

what i am esp. loving these days is my friends having kids. we have plenty of friends with children, but it’s only recently that some of my very oldest friends are having babies. what i am loving even more is that my very oldest guy friends (greg and simon/simos, that’s you;) are having babies before my girlfriends. and what i am loving even more, if that’s possible, is watching them as new dads.

ok, so i am not just watching, i am, as the jews say (in yiddish), is kveling [say: K (as in: c‘mon!) K-vel (like “bell”)-ing], which basically means (b/c there’s no dictionary translation for yiddish words b/c us jews take so darn long to explain everything) bubbling over with emotion–like…bursting at the seams. they are already the best dads to these little boys (grant & evan). and what’s even cuter is that they’re both really big guys and seeing them hold these little babies and coo all over them is like…….well, i kvel. and then i get a little verklempt. then i plotz. and then i need a nosh. (when don’t i need a nosh?)

ok, WAIT. stop. i have referenced too many funny ethnic things in this post to go on any further b/c 1) i’m laughing too hard and 2) you need to know what i’m talking about if you don’t know already b/c it’s too funny for you not to know.

the title of this post is one of my favorite lines from “my big fat greek wedding” (one of my all-time favorite movies), which is said more along the lines of:

the dad (Gus) said this to the fiancee (Ian) in the movie–b/c he had to be baptized as greek orthodox before he married his daughter (Toula). holly had to whisper “don’t say that to anyone today, ok???”  to me at least three times yesterday at the church and then again at lunch afterwards (you can’t take me anywhere. really, you can’t), esp. since a grown man was being baptized (JUST LIKE IN THE MOVIE!) at the same time (simon’s soon-to-be brother-in-law; it was a two’fer yesterday. total baptism two’fer) as evan.

i wound up breaking down and telling evan it was his a-lucky day to be a-bapitzed in the greek orthodox church at the restaurant after lunch. i was high on greek pastries. luckily he’s three months old and didn’t get it. ha.

in honor of evan and yesterday’s festivities and this blog post and new babies and ethnic ppl in general, i am posting one of my favorite scenes from the movie. (YES. IT WAS MY TWIN. you know the one! ha.)

i am also posting a classic clip of coffee talk with linda richman, she of verklempt. (this is the one with *madonna* and roseanne!!! and BARBARA. like BUTTAH! like two sticks’a buttah!)

love the greeks! love the jews! (WHY ARE WE SO SIMILAR? WHY DO WE TALK SO LOUD?!!)

turn up your volume & prepare to laugh. these will make your day.

(ok, i just watched both of those again and i have tears, i’m laughing so hard. tears. omg i love it.)

meet me at the tractors 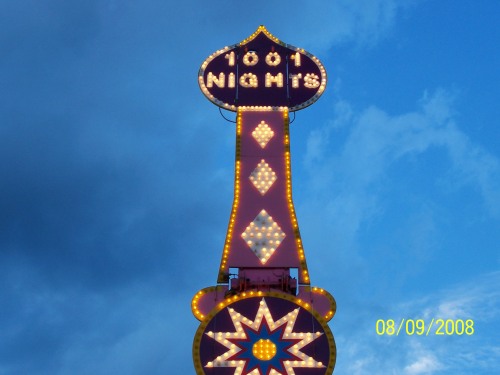 before i begin writing this entry, it’s essential that you know that holly’s hometown of butler, PA (“pee-ay”) is NOT a farm town. it’s actually a big place, a city, really, and much bigger (and a helluva lot less snotty) than my hometown of caldwell, nj, (OLD-SCHOOL Z100 SHOUT-OUT TO ALL MY JERSEY PPL IN THE HOUSE SAY HOOO-OOOOH! say ho! ho! now screeeeeeeeeeeeeeeeeam!) but there are farms in the vicinity of butler, PA–and a lot more green than baltimore, dc or northern jersey–which means big animals, four-wheelers, huge lawnmowers, tractors and yes, farm shows.

the whole family went out to the butler farm show saturday night, a dusty, sun-filled extravaganza of fresh-off-the-‘tater fries, trucks, squeaky/wildly-blinking rides (that you could only get me on if you killed me first–fyi, totally not just saying that), smelly (but awesome) animals and also peach (and apple) cobblers drowning in fresh vanilla softserve (hold me down, omg. so good). as the saying goes, a picture speaks a thousand words, so, without further ado, here’s a brief tour:

first we got our hands stamped with sticky acrylic paint-type stuff. that's holly's arm on the left, mine on the right. (i know, you all were dying to see what our arms look like.)

first we saw some animals. they were adorable, if not a tad smelly. i found it really funny that they were there at all, i mean, just for us to look at and stuff.

cows, less than thrilled to see us. (WAIT, *this* is where milk comes from?? omg i'm totally not drinking it anymore.)

wheeeeeeeeee! (yeah, like i said, if you want to get me on one of those, you're gonna havta carry my cold, dead body w/ya. good luck w/that.)

well! now that i know john the greek has welcomed me to the fair, i feel so...welcome! (found this adjacent to one of the fair's many gyro stands.) 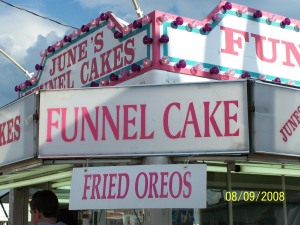 well dip me in batter and drop me in hot oil! i'll take 15 fried oreos, please!

good to know considering i just--burp!--ate 15 fried oreos. (found this gem of a sign at a indoor church booth. it was above a funhouse-type mirror that, yes, did, in fact, make me look quite wide.)

by the time we were finished at the farm show, my black pumas were thoroughly dusty and i was uncomfortably full of assorted fried delicacies–something i do not partake of often but i do enjoy (that is, until about two minutes later when the requiste guilt and stomacheache kick in). the next morning (yesterday), we all went to celebrate the baptism of baby brennan, holly’s newest nephew. i volunteered to be the family photog. this is something that started, let’s see, two summers ago at the baptism of landon (one of holly’s other nephews, both belonging to her twin sister). it must’ve been august then–or september?–and holly’s mom asked if i could do it. i shrugged and said, sure, why not. i felt a sense of pride that she would bestow such an important task in my hands–hands that, at that point, were not all that accustomed to digital cameras. i felt weird enough, being in a church at all, had never been to a baptism and taking photos to boot? but i rose to the challenge, as they say, and before i knew it, was zooming in on the holy water like a pro. this time around, holly’s mom didn’t even ask me; i brought her camera along and got up with holly, her two sisters, niece and brother-in-law when the pastor called them up to the front.

i mean, here’s the thing: i’m just a jewish girl from new jersey. and, really, it was just a coincidence that i didn’t wear all black yesterday morning. usually i feel like i stick out like a sore thumb, not only in holly’s town, but in her family. it’s been tough-going w/both our families over the past seven years. but holly’s family, they’re tight. they fight hard, but they love even harder. getting used to “us” (and me, esp. me) has been a process. and i’m the first to admit that i’ve been a giant pain the ass (i’d blame it more on culture shock vs. actually being a pain in the ass, tho i can def. be one of those, too) but being up there, involved like i was, my fear of being at the front of the church, in view of absolutely everybody, to get a good shot, my hesitation of not actually being a “real” part of the family…it all sort of slipped away. in fact, i don’t think i’ve ever felt more like a part of the family. in the midst of it, i turned around to look at everyone in the pews, and holly’s mom and i locked eyes for a moment–and we both smiled at each other. it put a lump in my throat, it really did. b/c in that moment, for the very first time, i felt like i really belonged there. i wanted to be there and ppl wanted me there. seven years in the making and not a moment too soon. welcome to the world, baby brennan! i’m aunt jessica. nice to meet you.

holly (aka, the Baby Whisperer) and brennan, post-baptism.