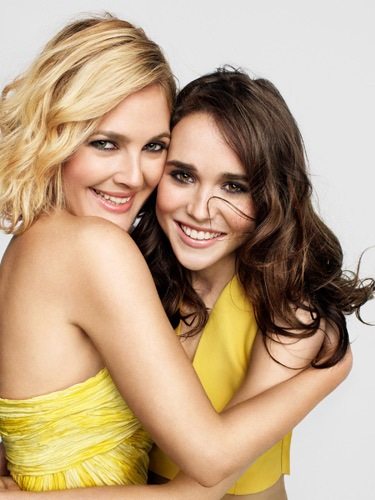 me and drew: besties. (except for that's not me on the right. but it could be. well probably not. anyway.)

every couple has their “gimmes.” you know, if you’re in a committed, exclusive relationship (yes, that includes being married; pbbbt! i know, boring right??) that person–or people–that are so understandably irresistible that your mate throws up his or her hands and pronounces that person your “gimme.”

most of the time gimmes are completely and totally out of one’s reach. movie stars, rock/pop stars and the like. straight women usually choose george clooney as their gimme. this confounds me. i know i’m gay as a day in may but c’mon ladies. what about someone like jude law or lenny kravitz? i personally think they blow him out of the water. but that’s just me and like i said, i’m a homo.

anyway, this whole famous-person-gimme thing keeps things fun and safe as your average person probably wouldn’t a) bump into any sexy famous ppl and b) have a chance w/them, most likely b/c they’d be blubbering about what a big fan they are and omg my husband/wife/partner totally says you’re my gimme.

(note: if you ever run into any of your famous gimmes don’t say that. instead act cool & sexy, then discreetly text your spouse/partner/signficant other that you have, in fact, run into your gimme and fair’s fair and my phone will be off for at least 90 minutes and i’ll text you when we’re done, love you ttys!)

but right, back to the famous gimmes. holly has a nice long list of these and they’re usually blonde. this pisses me off to no end as i am very clearly a brunette. of course we have a lot of the same gimmes and holly’s a brunette. but we’re not talking about me, we’re talking about her and plus the rules are different for me, don’t ask me why but they are.

so holly’s #1 gimme has always been, and will most likely forever be, the lovely drew barrymore. i can’t say i blame her. portia di rossi is a close second. there are more, but i think i’m purposely forgetting them right now b/c most of them are blonde. [oh wait: i just remembered another–shannon tweed (also a blonde). you know, the ex-playmate and longtime partner of gene simmons. holly’s into the strong older woman type and i get that.]

anyway, obviously we’re very open about this kind of stuff, and we recently had a very frank conversation about drew barrymore and her gimme-ness.

i proclaimed that drew is one of my gimmes, too. so what if we were to actually run into her?

“well, we’re obviously not sharing her. it’s either you or me,” i told holly. (i think we were in the car.)

“well then i would get her,” holly proclaimed, all high and mighty-like.

“and i’m four years older than you, which means that i’ve loved her longer. so i get her.”

she had a point. dammit.

“that’s fine,” i told her. “b/c, honestly, i think drew and i would wind up becoming best friends anyway. we might hold hands or make out or something, but mostly we’d probably get lattes, do our nails, get lunch and talk about our favorite books.”

“yeah, drew barrymore and i wouldn’t be doing much talking,” she told me.

“whatever,” i said, probably crossing my arms at this point.

“look,” i said. “if you ever meet drew barrymore, i kind of feel like you might leave me for her and you two might actually become a couple. if this happens, i want you to know i’m going to be pissed but i’ll understand. i would. but since my number is the primary on our cell phone account, i also want you to know that i will immediately drop you from our family plan. i know your family’s important to you, so i’ll call them first and tell them so they don’t worry when your phone number doesn’t work anymore. i don’t think they’ll blame me.”

“thanks, babe. you’re the best wife ever.”

“i know. but chances are you won’t meet her, and this is a moot point.”

“i might,” she whispered. at this point i decided to be the bigger person and not argue anymore and instead thought about how i really am a great wife.

ok, so who are your gimmes? mine, in no particular order, are including but not limited to:

yes, drew. yes, portia. also: rihanna, karen from will & grace, the latina girl (ok i actually think she’s iranian in real life) who was on “the l word” for a while (tho i’m not sure how long since i had to stop watching that show as i found it highly annoying), katy perry and, the newest addition, kyle from the real housewives of beverly hills (does she count? she’s a reality tv star. disclaimer: strike that from the record if she turns into a crazy and/or psychotic megabitch). discuss.

p.s. yes, i really would drop holly from the family plan. like a hot potato.